Whether it’s visiting wine country by doubledecker bus, rafting on a tidal bore or tucking into a lobster feast, there are memories to be made in Nova Scotia. Nova Scotia is the kind of place where strangers stop to talk and smiles come easy. It’s also where this famous east-coast hospitality, fresh seafood, good wine and pristine beaches all come together to create memorable summer holidays. Just a six-hour flight from the UK, there’s no shortage of things to do, from exploring historic fishing villages to world-class surfing. Here are our top 10 recommendations.

Line up a lobster

Whether it’s fish and chips from a food truck or fresh oysters from a trendy downtown restaurant, there is no shortage of seafood here. Although Nova Scotia is renowned for its lobster, other seafood options are extensive and menus are constantly evolving, but for a traditional lobster feast, you can take your pick from a lineup of restaurants along the Halifax waterfront. The most famous local lobster experience, however, can be found at the Shore Club, located by the shore 30 minutes outside of the city in Hubbards. The club has been around for more than 80 years and is popular with locals, while the restaurant serves a daily lobster dinner throughout the summer. 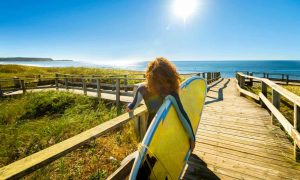 The charming seaside town, located an hour south of Halifax, on the South Shore, is known for its brightly painted wooden houses and buildings. The colourful facades are meant to reflect how the town would have looked during Victorian times, when houses served as beacons for the ships coming in to port. It’s the perfect town to stroll in, stopping for a fresh seafood lunch by the water and admiring the secret coves and fishing boats. It’s also home to the Fisheries Museum of the Atlantic, as well as the Ironworks Distillery, where visitors can enjoy both local spirits and a lesson in Lunenburg’s history of rum running.

Have a pre-breakfast surf

The secret is out: some of the best waves this side of the Atlantic are waiting for those intrepid enough to withstand the cool waters. Think misty mornings, wetsuits and world-class waves, all set against the bucolic backdrop of friendly, rural communities. Infamous east-coast storms and hurricanes can result in some intense waves, but it’s still a good spot to learn, with the help of expert teachers at East Coast Surf School. Bonus: the waves are so close to the city you can hit the beach for an early-morning surf and be back in time for breakfast.

Kayak through a network of more than 20 islands, with incredible local guides at Cape LaHave Adventures. Paddlers can learn about the flora, fauna and folklore of the region and see untouched beaches and coastal wildlife, including seals. Choose from a two-hour lesson to a three-day glamping adventure that includes campfires, craft cocktails and fresh oysters for dinner.

During Prohibition, many Nova Scotian fishermen opted for a lucrative career change: rum running from Canada to the eastern seaboard of the US. The former train route that transported much of the booze from the hidden inlets to the main ports, almost 100 years ago, has now been converted into a 74-mile multi-use trail that runs between Halifax and Lunenburg. The trail is the ideal way for outdoor enthusiasts to explore the coastal communities, stopping at local cafes, bars, beaches and provincial parks along the way. 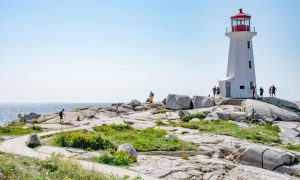 Nova Scotia is home to more than 150 lighthouses, but the one at Peggy’s Cove is definitely the most recognised. Just a 40-minute drive outside Halifax, the cove is covered in sprawling granite boulders that stretch out into the crashing waves of the Atlantic, creating a dramatic backdrop for landscape photos and windswept selfies. Wooden fishing shacks and lobster traps line the inlet that both local fishermen and an inspired community of artists all call home.

Fossil hunt at Bay of Fundy

The Bay of Fundy is a unique, visually arresting coastal environment. Every day the tide rises as high as 16 metres (53 feet) and during the following six hours recedes back down, leaving behind geological gems on the ocean floor. At low tide, it’s possible to walk along the mudflats, hunt for fossils and look at marine life in tidal pools. For a more adrenaline-infused way to experience the tides, head out on a tidal-bore rafting adventure. When the incoming tide meets the Shubenacadie River, the waves created by the tidal bore make for a pretty wild rafting ride.

On the Halifax waterfront

Halifax boasts almost 4km of boardwalk and the waterfront is jam-packed with museums, farmers’ markets and shops. There are also plenty of options for harbour tours. Alternatively, watch the boats sail in while sipping on a cold pint in a beer garden, or head somewhere a little more upscale, like the Five Fishermen, to feast on fresh seafood and local wines. Catch some live music at Stayner’s Wharf Pub and Grill, or at the iconic Lower Deck, located in one of the beautiful Historic Properties. Across the harbour, the downtown of neighbouring Dartmouth boasts lots of excellent cafes, breweries and restaurants. The ferry takes just 10 minutes to cross and offers excellent views of the city. 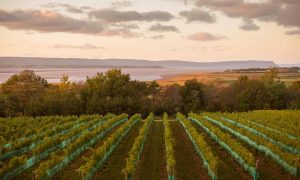 Enjoy the magic of wine country

The last decade has seen a surge in vineyards in Nova Scotia, most of them located in the gorgeous Annapolis Valley, a collection of farms and vineyards that are on a similar latitude to Bordeaux. The coastal region is one of the cooler climate limits for vines, and the results yield crisp, bright white wines that pair spectacularly with seafood. There’s even a Tidal Bay appellation, with most wineries producing their own blend made from 100% Nova Scotia-grown grapes. A hot tip to visit wine country in Nova Scotia is to board the Magic Winery Bus, a vintage British doubledecker that provides a guided hop-on hop-off service to the best wineries in the area.

Wherever you end up in Nova Scotia, you can count on a beach being close by. The province has more than 8,200 miles of pristine coastline, including the many islands that dot the coast, and there are beaches to suit everyone’s taste. Think white sand and crystal-clear turquoise water, rocky, mist-laden shores with rolling waves or swimming and relaxing at the warm water beaches of Northumberland Shore. If you fancy surfing, Lawrencetown beach is a favourite, with its sand and cobblestone beach and big waves, just half an hour from the city centre. Crystal Crescent, just 40 minutes south of the city, is an expansive crescent-shaped beach, backed by a gorgeous 12-mile coastal hiking trail.