The secret is out. Halifax and its surrounds are a laidback, coastal paradise where postcard perfect seaside towns and vibrant nightlife make for a good time, recommends local Jaime Jacques.

Foodies take note, a culinary boom is happening in Halifax right now, and the land is linked to everything. Visitors can expect to find ciders made with robust heritage apples, beers infused with locally grown blueberries, and of course, seafood everywhere, including some of the best lobsters to be found on the North American Atlantic coastline. The city is home to seven universities, and it’s got the youthful spirit to prove it. Breweries, cafes, live music and general levity can be found around every corner. Here are a few neighbourhoods and nearby regions that visitors shouldn’t miss to get a true taste of Canada’s most playful port city, a destination that’s only a six-hour flight from the UK.

One of the city’s oldest neighbourhoods, the North End has been revived and transformed of late. The streets are an eclectic mix of colourful saltbox houses, old industrial warehouses and hip restaurants serving up craft beer, local wines and creative fare.

For a casual afternoon pint in the summer, there’s nowhere better than the patio at Good Robot Brewing Company, where there is a rotating cast of all-star brews on the go and the vibe is always friendly and fun. The small but funky 2 Crows Brewing Co also has 12 taps and a brand new reveal every Saturday. Bar manager Mitch Gilbert recommends the Pollyanna Wild Northeast IPA, a juicy, tropical, bitter IPA that’s been flying off the shelves.

“We propagate and grow our own yeast grains,” says Gilbert. “Then we add fruits sourced from Nova Scotia and malt from neighbouring Prince Edward Island. The results yield a quite extensive selection of barrel-aged beers.” 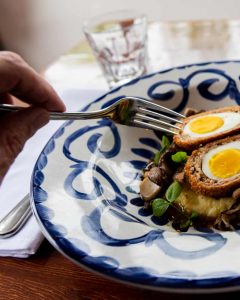 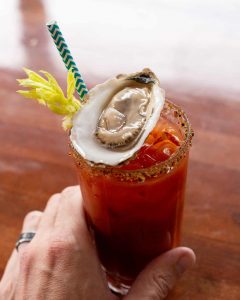 For an unforgettable brunch, check out Edna, the bright and airy neighbourhood favourite, full of foraged wildflowers, a wide selection of beers and ciders, and some of the city’s best steaks, burgers and seafood. Later in the day, visit Field Guide – it’s just across the way and the perfect place to start off an evening. Try exquisitely crafted cocktails while enjoying the sharing menu that changes according to season.

Popular with visitors and locals alike, Bar Kismet will complete your visit to Halifax, but you’ll need to book ahead or queue. Recently voted the 15th best restaurant in all of Canada, Bar Kismet gets everything right, nailing famous east-coast hospitality with stylish minimalism and exceptional seafood dishes. Award-winning bartender Cooper Tardivel recommends the signature cocktail, Return of the Sumac, paired with the popular appetiser ahi tartare and allumettes fries.

Downtown and the Halifax waterfront

Citadel Hill strategically overlooks Halifax harbour and is what enticed the British military here in 1749. It’s worth a visit, and not only for the view from the top. From there, head downtown, stopping for a stroll in the Public Gardens. Don’t miss the amazing Halifax Central Library, a cultural hub with award-winning architecture and two excellent cafes inside.

Head to Argyle Street for a bite or a pint or two after a day of exploring the city. The strip is one of Halifax’s nightlife hubs, where patios line both sides of the pedestrian-only zone. East of Grafton has a lovely little outdoor terrace that’s popular for lunch and alfresco dinner in the warmer months. Farther down, the elegant Lot Six stands out when it comes to local seafood dishes and cocktails, while The Five Fishermen offers up inspired seafood with an upscale casual atmosphere.

For traditional east-coast nightlife, try Durty Nelly’s, while the Carleton is a must for live music in a cosy, friendly atmosphere.

On the waterfront, a favourite place for a dinner date is The Bicycle Thief. Think incredible house-made pasta tossed with melt in your mouth scallops, sublime red wine and candlelit tables right beside the water. For afternoon pints by the water check out the Stubborn Goat Beer Garden where, as they say, beer tastes better by the ocean.

Once at the Halifax waterfront, it’s easy to catch the ferry across the harbour to downtown Dartmouth, which is developing its own hip little collection of bars and restaurants. Heading up the local favourites is the wildly popular Canteen, conveniently located only steps away from the ferry terminal. There’s also the casual Battery Park, offering a slew of craft beers and home to Ace Burger Co, voted the best burgers in Halifax for several years running. For coffee, hit up Two If By Sea, the bright and friendly neighbourhood cafe that’s next door.

Visitors to Halifax should also consider a trip to Nova Scotia’s wine country – it’s just an hour from the city. Leading the way is Lightfoot & Wolfville Vineyards, a biodynamic, organic winery with strong Acadian roots. Owner Rachel Lightfoot’s family has been farming in the valley for eight generations, creating German-style wines including riesling and pinot noir.

“For us, being in tune with the land means being constantly connected to the past and future generations,” she says. Lightfoot recommends trying their bestseller, the Terroir Series Scheurebe. “Nova Scotia’s ocean-influenced cool climate provides freshness and energy, melding with the inherent aromatic intensity of the scheurebe grape to create a truly unique wine,” she says.

Another notable favourite is Luckett Vineyards. Pete Luckett is a transplanted Brit who emigrated to Nova Scotia and became a local celebrity. The restaurant is highly recommended, especially the charcuterie board. For beer lovers, Church Brewing Company offers an exceptional collection of craft beers and ciders and locally sourced hearty meals. 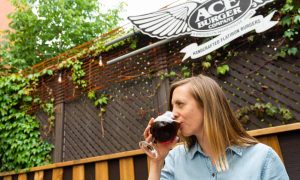 The area surrounding Tatamagouche boasts several beaches, and because the Trans Canada Trail runs through it, visitors can walk, bike or run their way through town. The village, just under two hours from Halifax by car, is also home to the popular Tatamagouche Brewing Co. The brewery is inside the former village library, bought and reinvented by local craft beer enthusiast Christiane Jost.

“The great thing about the beer scene here is that breweries are in every corner of this province,” she says. “We offer world-class beer with unique twists, using local ingredients.”

Jost also recommends local restaurants Train Station Inn and the North Shore Diner. “They are both open seasonally, and create fresh food that showcases our local produce,” she says.

The idyllic seaside villages of Mahone Bay, Peggy’s Cove, Chester and Old Town Lunenburg, a Unesco world heritage site, make up the south shore, and a scenic coastal drive to visit all four is one of the highlights of a visit to the region. For a self-guided tour, rent a car and enjoy the drive at your leisure, exploring the colourful seaside towns along the way. The area is peppered with local cafes, galleries and boutique shops, perfect for random stops. Over the years, there has also been a surge of creative cuisine along the route, focusing on fresh seafood, seasonal greens and berries, and of course, ciders and beer.

Try starting out at The Barn in Mahone Bay or No9 Coffee Bar in Lunenburg for excellent food, coffee and ambience. For something more substantial, check out Grand Banker Bar and Grill for the famous Lunenburger, six ounces of local ground beef, topped with smoked mozzarella and bacon, spinach, Nova Scotia lobster and a bacon-wrapped scallop. If you still have room, check out the Grand Banker’s sister property Shipwright Brewing Company, for some more craft beer sampling.